Start a Wiki
The author(s) of this world are openly seeking contributions to this work.
Feel free to add to edit to your heart's content. Thank you.

Atland, also known as the Republic of Atland (Atlandish: Republica n'Atland), is a sovereign state in north-western Europe occupying a big island of 254,600 km2, between Iceland and Ireland. The capital and largest city is Rockall, located in the sotuh part of the island, whose metropolitan area is home to around a quarter of the country's 1 million inhabitants. It is otherwise surrounded by the Atlantic Ocean, with the Celtic Sea to the south-east. It is a unitary, parliamentary republic with an elected president serving as head of state.

The Atlantic Ocean and the warming influence of the Gulf Stream affect weather patterns in Atland. Temperatures differ regionally, with central and eastern areas tending to be more extreme. However, due to a temperate oceanic climate, temperatures are seldom lower than −5 °C (23 °F) in winter or higher than 26 °C (79 °F) in summer. The highest temperature recorded in Ireland was 33.3 °C (91.9 °F) on 26 June 1987, while the lowest temperature recorded was −19.1 °C (−2.4 °F). Rainfall is more prevalent during winter months and less so during the early months of summer. Southwestern areas experience the most rainfall as a result of south westerly winds, while Rockall receives the least. Sunshine duration is highest in the southeast of the country. The far north and west are two of the windiest regions in Europe, with great potential for wind energy generation. 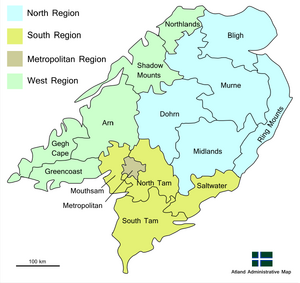 The 10 most populated cities without metropolitan areas:

Retrieved from "https://conworld.fandom.com/wiki/Atland_Republic?oldid=193332"
Community content is available under CC-BY-SA unless otherwise noted.