View source
watch 01:40
The Sandman Will Keep You Awake - The Loop
Do you like this video?
Play Sound

This project is up for adoption. Reason: I no longer wish to work on this conworld DaneOfScandinavy (talk)

The author(s) of this world are openly seeking contributions to this work.
Feel free to add to edit to your heart's content. Thank you.

Kerguelen is a microcontinent in the southern Indian Ocean, 3,000 km southwest of Australia and not far from Antarctica. It extends for more than 2,200 km in a northwest-southeast direction. Kerguelen was formed 100 million years ago by the Kerguelen hotspot. It is the seventh most populous of the worlds continents, placing it between Zealandia (New Zealand) and Antarctica. Kerguelen has 2 fully recognized sovereign states, the Republic of Kerguelen and the United Towns of Kerguelen, and 1 territory, French Kerguelen (France).

In 1786, France and the United Kingdom fought a war over Kerguelen, due to the overlapping claims in the area. The war ended with British victory, and the United Kingdom annexed most of the continent, establishing the Colony of Kingsland. France, however, continued to have control over the northernmost parts, called French Kerguelen.

On July 10, 1970, Kingsland gained independence from the United Kingdom, and the Republic of Kerguelen was officially formed. On February 1, 1982, the southern part of the republic became autonomous. 14 years later, on April 21, 1996, the area achieved independence and changed its name to the United Towns of Kerguelen. 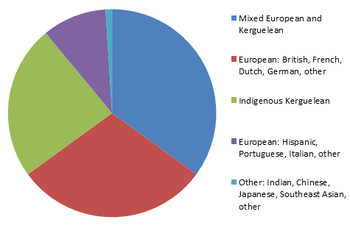 In Kerguelen, the ethnic groups are:

The indigenous Kergueleans mainly live in the central and southern parts of Kerguelen, the French mainly in the northern parts, and the rest are spread all over the continent. The British are the largest ethnic group of Kerguelen.

The most spoken languages in Kerguelen are as follows: English, French and Kerguelean. English is spoken all over the continent, while French is mainly spoken in the northern parts. Some other languages spoken include Hindi, Chinese, Japanese and various European languages such as Dutch, German, Spanish, Portuguese and Italian. Most of the population however, can speak English or French as well.

Because of the many Europeans in Kerguelen, the culture is very alike the culture of Europe, especially the United Kingdom and France. It's generally accepted that Kerguelen, or at least French Kerguelen and the Republic of Kerguelen, belongs to the Western World, with globalization and immigration from Asia being major issues. Besides that, the Kerguelean culture is still important for those, who are either of indigenous Kerguelean or mixed European and Kerguelean descent. The indigenous culture of Kerguelen is very unique. Historians assume that the indigenous population originally came from Asia and over time intermixed with the cultures of neighboring islands. Other cultures that influence Kerguelen include that of East Asian, African, and Indian labor workers as well as various European cultures besides the English and French. There is a large amount of Spanish, Portuguese, German, Italian, and Dutch immigrants.