With the final establishment of Everett's own form of currency and the final phase out of American money, Everett had produced three official coins, the five cent nickel, ten cent dime and twenty five cent quarter and two additional coins, fifty cents and one dollar. Everett had eliminated sales taxes which eliminated the need for pennies. All other uneven amounts of money are rounded up to the nearest five cents. Nickels consist of 75% copper and 25% nickel at .835 inches across or just over 21mm. Dimes consist of 92% copper and 8% nickel at .7 inches across or nearly 18mm. Quarters consist of the same amounts as dimes, 92% copper and 8% nickel at nearly one inch in diameter with mock gold plating on the exterior and an interior of mock silver. Like alongside the United States, Everett began producing it's own state quarters, starting in 2006 and ending in 2010, producing all 37 states, starting with New York, the first state to join the new union. At the same time, standard quarters were produced, containing the Everetti Bald Eagle emblem which is also found on the flag and on the reverse side, the Department of the Treasury emblem. Both sides of the quarters, fifty cent coins and dollar coins have thirty seven stars. With the secession of Minnesota and Hawaii, two more state coins will be released. 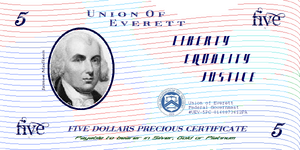 Banknotes or paper currency in the Union of Everett are officially minted by the Union's federal government Department of the Treasury. Unlike paper currency formerly used in the United States, Everetti banknotes are designated as backed by precious metals, giving monetary "gold standard" value. The paper notes are unique, featuring hologram foil and specialized inks which glow bright green when burned.

The typical front design of the "generation two" paper note, features the note worth in each of the four corners. On the upper left and lower right corners, the bill worth is in numerals while in the upper right and lower left corners, is written in full English lettering. A portrait on the left side of the note is featured, referred to as a "national patriot". On the right side of the note, the national motto of "Liberty, Equality, Justice" is seen and in a shining holographic foil material that changes color when viewed from varying angles. Below is the official seal of the Department of the Treasury and print data information, including a country code "UEV" separated by a dash, followed by its worth. For example "10PC" would mean "$10 Precious Certificate". This is followed by a dash and a ten number serial code and two letter at the end, the state of minting initials. Along the top of the note, "Union Of Everett" is printed and along the bottom reads the amount of the note followed by "Precious Certificate", which designates the note as officially backed by precious metals including gold. Below that is a Gold Standard notice, "Payable to bearer in silver, gold or platinum." The entire background of the front banknote features red, white and blue ribbed, curving lines. Each of the four corners, where note worth is shown, one can feel braile bumps for the blind to read the note's worth.

The typical rear of the generation two banknote features the same numerical and written value in the corners, though on the opposite sides, the upper left and lower right being written in English worth and the lower left and upper right in numerical worth. Along the top reads the note's worth in full lettering and along the bottom it reads, "Union Of Everett". Just above the bottom it reads, "United As One, Divided By None". The rear side of banknotes feature two images. On the right side, each note worth, like the front featuring a "national patriot portrait", features a national monument, natural wonder or famous landmark in semi color holographic foil material. At certain angles, full color of the image can be viewed, while at others, the image is a dull black and white. To the left side of the note, a seal is visible, similar to that of the United States "all-seeing eye pyramid" emblem on U.S. paper currency. It has been noted by analysts that the emblem on Everetti paper currency is an anti-Illuminati mockery. The emblem features the all seeing eye pyramid upside-down and what appears to be the all-seeing eye itself, smashed and shattered on the ground. The upside-down pyramid is surrounded by the Everetti national motto, with "Liberty" at the top and then "Equality" and "Justice" on each side of the upside-down pyramid. The background of the rear of a paper note features green, ribbed, curving lines.

Retrieved from "https://conworld.fandom.com/wiki/Everetti_Dollar?oldid=172273"
Community content is available under CC-BY-SA unless otherwise noted.