The flag of Heigard (French: Drapeau d'Héigard, Spanish: Bandera de Héigard) was designed in 1810 to replace the flag used during the Civil War by the Republicans. It is divided in four quadrants, the two upper being red and white and the two lower white and blue.

The colors represent the political situation in the aftermath of the Civil War: the red represents the Monarchist Party, the blue the Republican Party and the white between them represents peace in which both groups coexist. The colors sometimes are said to represent the blood shed by patriots, the sea surrounding the country and peace. The quarters are intended to represent the only four inhabited islands of Heigard.

Panama's flag is almost identical to that of Heigard.

The present laws and regulations on the Heigardian flag are:

The official colors of the flag, adopted by Christian Russell are: 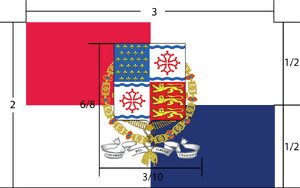 The basic design of the flag with the Coat of Arms is specified in decree 1002/1972, stating the following:

The flag can be flown horizontally from buildings, private homes, bussinesses, ships, town squares, or during official ceremonies. While the flag should be flown from sunrise to sunset, public buildings and government offices in Heigard and abroad should be flown in a 24-hours basis, always well-lit.

Military regulations stipulate that the flag is never intended to touch the ground, as its disrespectful and may mean surrender in certain instances. When a flag is dishonoured, the commanding officer orders to cut the flag into several pieces (separating the quarters) and burning the pieces on the parade ground before the next flag hoist.

When flying the Heigardian flag with other flags the order of precedence must be: The national flag, flags of foreign states, the flag of the European Union, international NGOs, military and government standards, region flags, city flags and any others. When foreign flags are flown along the Heigardian flag, the order in which they are placed is sorted by their countries' names in their native languages.

In mourning activities the flag can either be flown half-staff, or for permanently attached flags, a black pennant is placed below the flag. During funeral services, the flag may cover the coffin of government officials, soldiers and persons designated by an act of the President.

Retrieved from "https://conworld.fandom.com/wiki/Flag_of_Heigard?oldid=93146"
Community content is available under CC-BY-SA unless otherwise noted.