This is a meta page for the Garbaterra universe and therefore, should be treated as out of character.

NOTICE: Unless you have formally applied here and been accepted, do not add your nation into this project or on this page without the expressive consent of the Garbaterra community consensus. We are still active as of July 2015

Garbaterra formed approximately 5.45 billion years ago, and life appeared on its surface within 300 million years. Garbaterra's biosphere then significantly altered the atmospheric and other basic physical conditions, which enabled the proliferation of organisms as well as the formation of the ozone layer, which together with Garbaterra's magnetic field blocked harmful solar radiation, and permitted formerly ocean-confined life to move safely to land. The physical properties of the Garbaterra, as well as its geological history and orbit, have allowed life to persist. Estimates on how much longer the planet will be able to continue to support life range from a billion years (myr), to as long as 5 billion years (byr).

Garbaterra's lithosphere is divided into several rigid segments, or tectonic plates, that migrate across the surface over periods of many millions of years. About 31% of the surface is covered by sweet water oceans, with the remainder consisting of continents and islands which together have many lakes and other sources of water that contribute to the hydrosphere. Garbaterra's poles are mostly covered with ice that is the solid ice of the Nortric ice sheet and the sea ice that is the polar ice packs. The planet's interior remains active, with a solid titanium inner core, a liquid outer core that generates the magnetic field, and a thick layer of relatively solid mantle.

Garbaterra gravitationally interacts with other objects in space, especially the Joras and the Night-Eye. During one orbit around the star, the Garbaterra rotates about its own axis 91.57 times, creating 90.56 solar days. The Garbaterra's axis of rotation is tilted 33.5° away from the perpendicular of its orbital plane, producing seasonal variations on the planet's surface with a period of one tropical year (90.24 solar days). The Night-Eye is Garbaterra's only natural satellite. It began orbiting the Garbaterra about 4.53 billion years ago (bya). The Night-Eye's gravitational interaction with Garbaterra stimulates ocean tides, stabilizes the axial tilt, and gradually slows the planet's rotation.

Its is a world inhabited by human race, with one dominant state - The United Kingdom of Great Paangoon - controls most of the realm.The "GIF" (Garbaterra International Force) keeps peace between states.  . Prosperity in the economic field is uneven, rich miners rarely help groups of farmers that are mostly poor. War occurs in other parts of the world, where small states fight for land and resources. 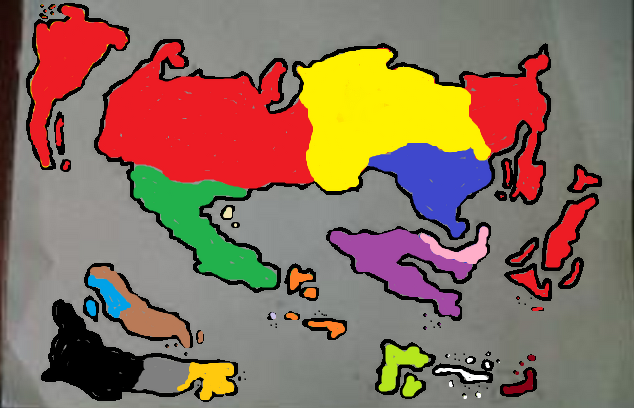 There are currently 17 sovereign states in the world. They are:

Following the recent withdrawal of Greater Cerberussy from the Garbaterra International Force, the Robototomatisia has merged with the empire, forming a special forces unit.

Arrived in Garbaterra from Earth at 2077. Drove native creatures away and settle most of the realm. Divided and built independent states.

Indigenous humanoids that settle the world (except Grexica) before the arrival of humans.

A race of Yat originating from Grexica before their invasion to Otechestvo.

A race of Yat that lived alongside the Vilkyats before the Battle of Ataziden.

Retrieved from "https://conworld.fandom.com/wiki/Garbaterra?oldid=215390"
Community content is available under CC-BY-SA unless otherwise noted.