Lisa Adelaide Foster (b. 7 May 1961) is a Georgeland lawyer and politician currently serving as Attorney-General of Georgeland in the government of Tom Elderton. Formerly a member of the Labour, Liberal and Liberal Democratic Parties, she is currently a member of Reform. From 2004 to 2006 she was Leader of the Opposition in the Scoitan legislature. She has been a Senator from Scoita since 2006. 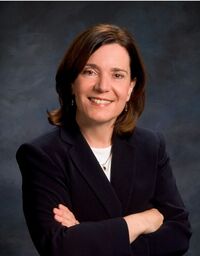 Foster was born in Doubledance in 1961, the second child of Morrie and Yvonne Foster, both of whom were in advertising. She and her family moved to Emilypolis in 1969. Educated at St. Francis' College and the University of Scoita, Foster spent a year on exchange at Yale from 1983-84. She graduated with a legal degree in 1984 and began work for law firm Hodges & Lane. In 1990 she relocated to New York and took a job at the Manhattan-based Thomas Sanders firm. In 1995, Foster accepted a job with the Labour Party, which she had joined at university, as its legal director in Scoita. After three years working for the party office Foster was elected to the Scoitan legislature for the seat of Hasberton at the 1998 state election. The following year, Foster joined the new United Islands Liberal Party following the Labour split; as a majority of legislators remained loyal to Labour, the Liberals took their place on the crossbenches.

In 2002, after a stint as the Liberal justice spokesman in the state legislature, Foster became Liberal leader. In 2004, the collapse of Labour propelled Foster into the position of Leader of the Opposition. That same year, the Liberals and Democrats (which had only three members in the legislature) formed the Liberal Democrats, with Foster as leader.

Foster failed to make an impact with Scoitan voters, who saw her as too left-wing for the largely conservative Scoitan electorate. Her stance on abortion (she is pro-choice) and self-confessed agnosticism did little to endear her to the largely Catholic electorate.

In 2005, she narrowly won a leadership challenge from deputy leader Simon Montague. At the Scoitan legislative election, 2005, the Liberal Democrats was resoundingly defeated.

In February 2006, Scoitan Senator Damon Grant resigned over the Civic Bank investment scandal and Foster was persuaded to accept the party's nomination to fill his Senate seat. Neil Connors replaced her as LDP leader in Scoita.

Foster sat on several Senate committees but was repeatedly looked over for ministerial office. From 2007 to 2010, when the LDP was in opposition, Foster was a junior shadow minister (for Customs & Coast Guard), but when the party won office in 2010 she was not appointed to the ministry, instead serving as Parliamentary Private Secretary to the Minister for Defence, a junior position. In 2012 Foster resigned to return to the back bench. She was chair of the Senate Committee on Constitutional Affairs from 2013 to 2016, and chair of the Joint Standing Committee on Justice & Legal Matters from 2016 to 2016. She was appointed as a junior minister, for Community Services, after the government's re-election in 2016.

Foster resigned from the government in protest against the appointment of Campbell Rhodes as president in 2017, and following the vote, which failed, voted against the government in the motion of no confidence, effectively ending her affiliation with the Liberal Democrats. As the Senate was not up for election, Foster continued to sit as an Independent, until the formation of Reform in the aftermath of the election. Foster joined the nascent party as its justice spokesperson, and became the Industry & Science critic for the New Coalition when it was formed in late June of 2018.

After the election of the New Coalition to office in June 2019, Foster took on the position of Attorney-General. She also took on the additional portfolios of Disaster Relief and National Security, and the position of Manager of Government Senate Business.

Foster met her husband, Dale Winston, a US citizen, while in New York. They were married in July 1993. Foster no longer holds US citizenship as, at the time of her election to the Scoitan legislature, state law did not permit dual citizens to hold office. This law was repealed by federal legislation in 2004, but Foster has not renewed her passport.

Foster has one son with her husband.

Retrieved from "https://conworld.fandom.com/wiki/Lisa_Foster?oldid=301988"
Community content is available under CC-BY-SA unless otherwise noted.