Luminaire, formally the Federal City of Luminaire, is the capital of the Republic of Atlion. It was first settled by French settlers exploring the Dentele River[1] in June 1586. It was formally designated the national capital by the National Capital Act of the Senate in 1800, as a compromise between Port James[1] and Northridge[1].

Luminaire had an estimated population of 2,686,440[1] in 2012, the twelfth-largest city in Atlion. The Greater Luminaire Area, the metropolitan area including the federal district, is one of the largest metropolitan areas in the country.

The offices of all three branches of the government of Atlion are in Luminaire, including the Senate, President, and Supreme Court[1]. Many government functions were relocated to Luminaire as a result of the National Capital Act, and it is now the location of the vast majority of national government functions.

Luminaire is governed by a popularly-elected mayor and fifteen-member Luminaire Council. Thirteen members of the city council are elected by residents and two are appointed by the national government. On the regional level, the district itself is represented in the Regional Government by five delegates, appointed by and responsible to the city council and mayor.

The name "Luminaire" is believed to have its roots in the French word for light, lumière. The Cathedral of Saint Michel's iconic bell tower played host to a navigation torch in its early days, to help guide boats travelling up the Dentele River. While the torch is no longer present in the bell tower, several lighthouses have been built in the area, which frequently suffers from dense fogs in early morning hours. The city is often called the City of Lights, or Ville-Lumière because of its history in helping vessels travel the river.

Luminaire was settled by wayward French settlers travelling by boat along the Dentele River in 1586. Deep fogs prevented further travel upstream, so the explorers disembarked and established a few houses made of logs.

Revolution and Designation as National Capital

Luminaire is an independent city, and is not part of any of the surrounding counties. In the National Capital Region charter, Luminaire City is on the same level as the five counties, and is therefore treated as a county-level entity by the Regional Government.

The legislative body of Luminaire is the Luminaire Council, a 15-member city council. The council is responsible for setting tax levels, creating civil laws, and appropriating annual budgets. Ten members of the council are elected as representatives of specific districts in the city, three members are elected as citywide at-large representatives, and two members are appointed by the national government, one by the Senate, and one by the President's Commission on the National Capital. The current chair of the council is Tom Mendelson.

Luminaire's geography is defined by the South Sagessic Hill range. Rolling hills dot the metropolitan area, and prominent government buildings occupy hilltops in the center city area. Downriver, the Dentele Valley is home to hundreds of thousands of suburban homes, a popular location for residences due to both the river itself and the deciduous treecover. The majority of the urban area exists on Luminaire Island, separated from the mainland by the St. Michel and Dentele Rivers. The remaining land area of the city consists of Peatree Island, to the west of Luminaire Island.

Luminaire has three major natural flowing streams. The Dentele River is the primary stream in the city, flowing north to southwest through the area. The St. Michel River separates Luminaire and Peatree Islands. The Paragon River forms the city's western border with Davis County, and separates Peatree Island with the mainland. The St. Michel River and the Paragon River are parallel branches of the Dentele, both passing to the north of Luminaire Island. The Dentele River pools into Lake Atlion immediately downstream of the Victoire Bridge.

The Luminaire Fire of 1815 destroyed much of the city. Thad Elliot, the government-appointed architect tasked with rebuilding the city, designed a city plan with a street system composed of a square grid. North-south streets are named avenues, east-west streets named simply streets. Major arterials are named after important historical figures, as deigned by the Senate Committee on the National Capital. Exceptions include Luminaire Boulevard, the main east-west arterial in the city, Peatree Avenue, the main north-south arterial on Peatree Island, and West Tonway Road, another east-west arterial.

Many of the thoroughfares named after historical figures are from pre-Republic history; some examples include Christopher McFarlane Boulevard and Pere Jean de Laurent Avenue.

Luminaire is a vibrant city, with many neighborhoods, each with a different culture and history. 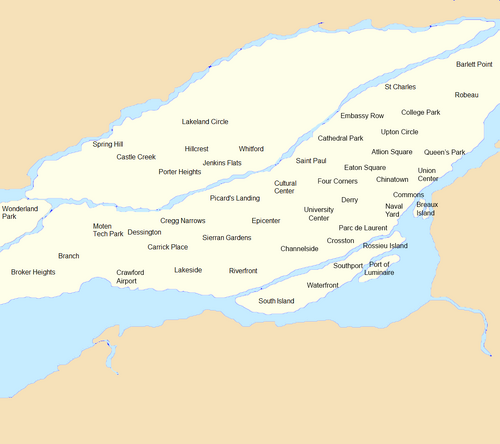 Mid-Island is the central portion of Luminaire Island and includes Downtown Luminaire, and is the core of the city, including its main commercial areas and the heart of the Atlionese federal government. Home to nearly all of the city's major sporting and event venues, including the Luminiare Stadium and Defense Field, the City Museum, National Aquarium, and many nightclubs, bars, restaurants, and shopping centers. The Luminaire University campus is located here, along with the Luminaire University Medical System's main and Parc de Laurent campuses. Residential areas here are generally limited to Chinatown, but Mid-Island is easily accessible from suburban residences across the Dentele River.

Down-Island consists of the southern parts of Luminaire Island downstream from Mid-Island. Down-Island is primary residential, containing the major neighborhoods of Branch (for which Branch Avenue is named) and Broker Heights, located in the area near the southern confluence of the three rivers. The Moten Tech Park, established as a result of an initiative by the city government is located here, along Moten Avenue along the St. Michel River.

Crawford Lakeside refers to the areas adjacent to Crawford International Airport. The airport has long anchored a thriving commercial district, which in recent years has catered to foreign multi-nationals seeking to locate offices near the international gateway for ease of access. The intersection of Aviation Boulevard and Victoire Boulevard is the heart of this area, and is a major intersection for commuters travelling to the airport or to other parts of the city from the suburbs.

Rossieu Island is the third largest of the six core islands that make up the City of Luminaire. Rossieu Island's proximity to Port Island has made it a popular location for light and heavy industry, including manufacturing and warehousing for goods shipped in and out of the Port of Luminaire.

Breaux Island is a major business district housed on the island of the same name. Located to the east of downtown in the Dentele River, the Breaux Island region typically also includes neighboring Timothy Island to the south. The islands are home to most of Luminaire's tallest buildings, and is the National Capital Region's largest purpose-built business district. The headquarters of General Defense is located on Breaux Island.

The Luminaire Commons is the largest urban park in the country. Designed to be the "common grounds for every Atlionese citizen". The 1,000 acre park features flower gardens, shade groves, an ampitheatre, several playgrounds, and the Capitol Building at its northern end.

Wonderland Park Resort, an entertainment and resort hotel complex located on Wonderland Island, is partially owned by the Federal Government, and was established as a retreat for vacationing government employees. It consists of a large theme park as the centerpiece attraction, a water park, two golf courses, and four resort hotels, each with a different theme.

Crime in Luminaire is generally concentrated in areas stricken with poverty and gang violence. The majority of the city's core residential neighborhoods on Luminaire Island itself are generally safe from crime, with poorer areas on Peatree Island contributing 40% of the city's crime.

The city's Metropolitan Police Department is the primary law enforcement agency in the city. It patrols the city, engages in crime-deterrence efforts, and enforces court orders and traffic enforcement. It also provides campus security for city public and charter schools.

The Mass Transit Administration Police (MTAp) is responsible for law enforcement on the city's public transit system. The Transit Police agency shares jurisdictional authority over the transit system with the Metropolitan Police.

Several federal police services, such as the Atlion National Capital Police Service and the Atlion Parks Police also have jurisdiction over wide areas of the city.

Luminaire's economy is service-centric. The federal government is the city's largest employer, accounting for about 40% of the city's jobs. The city's unemployment rate is 6.8% as of Q2 2012. The region's largest non-federal employers are National University, Mass Transit Administration, General Defense, West Commons Medical System, and University System of Luminaire.

Luminaire is the last port before the head of navigation on the Dentele River and is an important port in South Central Atlion. Luminaire, as national capital, is also a major road, rail, and air hub.

The Luminaire Orbital, Interstate 901, circles the city, and travels for a short distance inside the city near Broker Heights. Interstate 1, the Christopher McFarlane Freeway, connects the Orbital with Statesport, Broker to the southwest. Local traffic into the city from Interstate 1 directed onto Christopher McFarlane Boulevard inside of the Orbital. The lack of interstate highways within city limits has caused severe congestion on several bridges across the Dentele River, particularly the Victoire Bridge, Queen's Bridge, and West Tonway Connector. Despite a near-total absence of high-capacity interstate highways, Luminaire is home to some local controlled-access expressways, notably the Lakeland Toll Road and the Branch Avenue Expressway.

Luminaire's main intercity rail station is Union Station, serving National Rail trains and commuter rail services to nearby suburbs. Union Station is the third-busiest National Rail station and the hub of Metrolink commuter service. Metrolink connects regional commuters with Luminaire and Statesport, in neighboring Broker, and is operated by CapTrans in conjunction with the Broker State Department of Transportation[1]

The city's subway system, Metro, was opened in 1965. Metro and the city's local bus network are operated by the Mass Transit Administration. An extensive network of streets, avenues, and boulevards make up the core of Luminaire's surface transport network. Cyclists, carpooling, and other alternative methods of transport are also important in the city. LightBike, the city's bicycle sharing program, is the largest in the country.

The Luminaire Times is the Luminaire Metropolitan Area's widest circulating newspaper. It was founded in 1825 by local owners.

Retrieved from "https://conworld.fandom.com/wiki/Luminaire?oldid=187643"
Community content is available under CC-BY-SA unless otherwise noted.