The Kingdom of Occitania (in French: Royaume d'Occitanie, Occitan: Règne d'Occitània), commonly known as Occitania is a small nation located in the French Riviera, near Monaco and Nice.

Historically the country used the name of Cap Ferrer, in honor of the ruling family. Occitania, traditionally a name given to the part of southern France where Occitan was spoken was applied to the Kingdom in 1691. 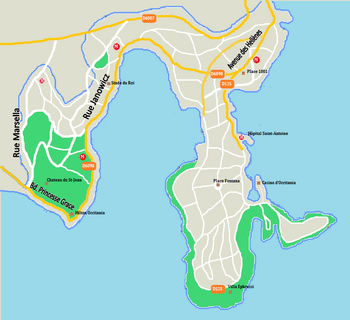 Occitania is located on the Cap-Ferrat, a cape located in the Côte d'Azur, southern France. Cap-Ferrat itself has a small cape, le Cap-Gitane (Gipsy's cape). It received its name for being host to Gypsies in the 1700s. Althought the country is densely populated, there are many natural areas. Along the Franco-Occitan border, there is a large forest, and the woods in the Cap Gitane seclude the mansions from view.

Occitania is split into five communes, St-Jean-Cap-Ferrat (the national capital, and most populous commune), Beaulieu, Villefranche-sur-Mer, Chateau Saint-Jean and La Corniche (the inspiration behind the Rolls Royce Corniche's name).

Occitania was known to the ancient Greeks as Anao. The site of present days Cap Ferrat was first settled by Celto-ligurian tribes, then by the Lombards at the end of the 6th century. Sant Ospizio (or Saint Hospice), a hermit friar, is said to have inhabited a tower on the Eastern part of the peninsula. In the 8th century, the history of Occitania changed when the Saracens occupied the site and used it as a base for pirating until the 11th century. In the 11th century, the area passed on to the French.

In 1297, a nephew of French King Philip IV of France, Jean Capet was granted titles and lands as the Count of Ferrat. In 1301, he declared Cap Ferrat's independence from France. It woud only be until the 1500s when most nations formally recognized the country. Ruled by its Kings and Queens, the nation prospered financially. In 1363, the Chateau du Saint-Jean was built, serving as the home to the royal family.

In 1592 King Carlo I died and created a power struggle between his sons. His two eldest had been born twins and were vying for the throne. Ultimately Carlo II became king and banished his brother, Antoine. In 1604 Antoine returned with a mercenary force and took control of the country, imprisoning his brother in the infamous Torre Martel prison. By 1610 Antoine had indebted the country and he was was the cause for a major revolt. His brother was freed from prison and he had Antoine killed. But, Antoine liege was able to capture and kill Carlo. After this episode the dead kings' younger brother, Jean VI, became king and ruled until 1648. In the mid-1600's, Occitania would be host to several banks, a tradition which continues to this day.

On January 7, 1794, French Revoltionaries invaded Occitania. Unlike nearby Monaco which was quickly overrun, Occitania's citizens took up arms to defend their country. Under the leadership of Eduard Reveille (made a Field Marshal) and King Giovanni I, they resisted the initial attack. After this unexpected event, Reveille organized a permanent force of 200 specially trained men. It would only be until 1800 when they would fight again. This time it was Napoleon's men who invaded, and they were successful. The King fled to Sardinia, and only until 1815 did he return, when the Congress of Vienna returned the country to the House of Ferrat.

When WWI broke out Occitania did not get involved in the fighting, but some citizens (as many as 1350) joined the French Army. When WWII started, many rich Europeans fled with their valuables to Occitania. The king, Antoine II maintained a strict policy of neutrality. When neighboring Monaco was invaded by the Italian Army in late 1942, Antoine II warmed up to Mussolini, and even hosted him at the Chateau du Saint-Jean, but this did not prevent him from invading the nation. When Mussolini was deposed in Italy, Occitania regained its independence.

In 1997, Occitania signed the Schengen Agreement, and in 2002 joined the European Union. 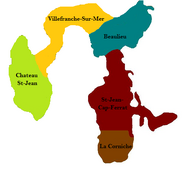 In Occitania, the King is the Head of State and the Prime Minister is the chief of Government. The Congress is the national legislature, which elects five members (25 in total) from each commune. Until 1951, all political positions were appointed but now the country holds elections. The political parties in Occitania are the Parti Blanc (Conservative), Parti Bleu (Liberal) Socialist Party, Parti Nationale (PN) Republican Union. In the most recent elections (2010) the Bleus won 9 seats, the PN won 7 seats, the Blancs had 5 seats and the Socialists had 4 seats. The Blue Party and the PN formed a coalition.

Each commune of Occitania has a town hall/city hall, which elects one mayor and 10 council members (5 in La Corniche).

In Occitania, there are three nursery schools, seven primary schools and one secondary school (the École Royal). It also has the Universitat Occitàna, a college specializing in politics and law, which is the only Occitan-language university in the world.

Occitania has several highways running through. The main ones are the D6007, D6098, D125 and D25. Although the nation is not very populous, it has lots of traffic problems, due to the country's small size and high number of tourists. Therefore Occitania has developed the Ligne Internationale (LI) metro system, along with Nice and Monaco. The Edith-Cavell Station of the LI also serves as the SNCF train station, with trains going to and from Lyon. There is also a tram going from La Corniche and southern St-Jean-Cap-Ferrat to Edith Cavell Station. Transport by boat is also important, especially for the rich. This explains why there are three large marinas and numerous other docks.

Due to large car ownership, Occitania issued its first Lisence Plates in 1923. In 2003, it switched to using the European Plates.

Historically, Occitania's main revenue source was in the tourism industry. Today tourism is still the biggest industry, but is slowly giving way to banking. In the 20th century Occitania gained the reputation as a tax haven, which has allowed it to have many banks and customers, often from outside the country.

As a very small nation, Occitania does not have a standing military or Air Force. Most of its defense is handled by France. But, Occitania does have a police department of about 800. 200 of these officers serve in the National Defense Force (NDF), which is a specialized police unit which handles SWAT activity and some aspects of a military. The NDF also has two armed speedboats, used mostly for patrolling purposes. The Royal Guard, composed of 88 members, is used to protect the Royal Family of Occitania, important government members and foreign dignitaries.

Retrieved from "https://conworld.fandom.com/wiki/Occitania?oldid=229111"
Community content is available under CC-BY-SA unless otherwise noted.