Ojidijes was inhabited by local ancient tribes well into the second millennium. Only the beginning of regular taxation after the Ferrine Civil War in 17th century brought the local population into a constant connection with the Proto-Ardenjostan population.

After Ardenjostan independence, there were massive plans for agriculture on the mainly wetland area in western Ojidijes. National investments went on well into late 20th century, but in recent decades the importance of the development has been continually downgraded in governmental plans. This, with other factors, made Ojidijes the only province with net population loss.

The 21st century has seen population growing again - but not GDP per capita, however. Opening of the southern border to Bexhas and Japile is likely to boost local economy.

the numbers are the same as in the map below 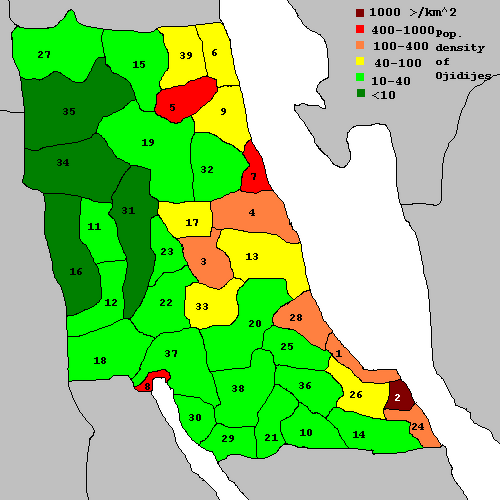 Retrieved from "https://conworld.fandom.com/wiki/Ojidijes?oldid=52370"
Community content is available under CC-BY-SA unless otherwise noted.