The Republic of Panau, or just Panau, is an island nation in the Malay Peninsula. The nation is made up of dozens of big-to-small islands in a square formation. The islands were discovered by the Dutch in 1649, and colonized accordingly. It was a vital trade hub in the east, and served as halfway stop between India and Australia. The current government of Panau is Unitary Presidential Republic, and is currently ruled by Pandak Panay, preceding his father, Syed Panay.

The English language name, comes from Malay word Panau, it's reference to "Winged Tiger". The word comes from Paduka Seri Wikrama Wira, the founder of ancient Panau and son of Sang Nila Utama. In one of his books, he says that when he was exploring the jungle in Panau, he saw a strange creature that looks like white tiger with pair of wings in the back and moved with great speed as it disappeared. Recent studies of Panau indicate that beast is just a white tiger, but because of surprised, Paduka Seri Wikrama Wira just saw the flash that look like winged tiger. Panau is the name of the country, and also the entire island collection. It is also a location in the game Just Cause 2.

Along with Singapura, the first recorded settlements were in the 2nd century AD. The islands were an outpost of the Sumatran Srivijaya empire. They, in turn used the settlement as a trading post. However eventually that declined, and today there are very few remnants of the old Temasek in Panau, archaeologists have uncovered artifacts of that and other settlements under the watchful eye of the current Panauan government.

On 2 April 1649, a Dutch explorer, Jan van Riebeeck, in his time in India, found Panau on a routine trading mission to Batavia, Indonesia. At first, he ignored the islands and went on to do his business in Batavia, however, on his way back, their ship, De Rode Vos got damaged, and they were forced to land on Panau. The crew were forced to remain there for two week, awaiting rescue, however found something astonishing.

For the first time in van Riebeeck's life, he saw deserts, snow capped mountains, and lush jungles, all in one place. The islands of Panau have that diversity. Immediately the islands became of great importance to the Dutch East India Company, and they ordered for a halfway station, and small colony to be set up. Eventually van Riebeeck was called back to the Netherlands and later went on to colonize South Africa. The new commander in charge was Koos Le Roux, a Dutch-French explorer hired by the company to establish a successful halfway station.

With sparks from the first and second Anglo-Dutch Wars, the British also went in to secure their place in the east. Sir Richard Boyle led a small army of British soldiers onto Panau and rid the Dutch. He gave the current settlers three options, 1) Fight the overwhelming British, 2) Stay on Panau and continue their lives without getting in the way of the British, or 3) Evacuate the islands and leave the British. Most of the population chose to stay on Panau and continue their lives there, however a large minority also chose to leave, and return to the Netherlands.

The British then held on to Panau for over a hundred years, and continued to use it as a trading hub, many commanders and governors came and went. Early in the 1900's, the now-native Panauans became hungry for independence and began small unsuccessful revolutions, to rid the English. So the Series of Panauan Independence Wars began. These wars went down in history for their number, and short lengths. However, in 1957, the fifth Panau Independence War saw Panau through to sovereignty.

The 4th Independence War almost brought the British to their knees, but with reinforcements arriving from Singapura, the British narrowly won this war, Sir Karl Thommy, governor at that time, was also killed in that war. Later, on 2 March 1948, the fifth and last revolutionary war, saw the end of the British occupation of Panau. This war was started by Dahari Panay, he unite almost all clan of the island's native residents, and attacked the British fort. They quickly overwhelmed the fortress and seized control, thereafter they attacked the unsuspecting capital city, New London.

After a 9 years of fighting, in 5 February 1957, the British and Panauan citizens signed an agreement, which stated that the British will help Dahari Panay build Panau, and will, upon his order, vacate the islands. The British, after helping the economy and infrastructure of Panau, left in 1972. At that time, Dahari's son, Vasan Panay had taken the rule of Panau. In 1973, he officially declared that the rule of Panau will continue in the Panay family.

The government of Panau is a Unitary Presidential Republic, with Pandak Panay as the president. There is two political major party in Panau, People's Revolutionary Party (PRP) and Panau Nationalist Party (PNP). Moreover there are several "rebel" groups also playing a large role in the country, such as the Panau Liberation Front (PLF), the government's biggest opponent.

Here are some of the Republic's most important foreign relations:

The Republic and the United Nations are in average relationships. At the U.N., Panau sent their 3,000 troops to joint the peacekeeper forces.

Panau and United States do not maintain good relationships.Trading embargoes were announced by U.S. in 2 February 2003 as effect of Pandak Panay policy. U.S. has ceased general communication with Panau, and encouraged its allies to do the same.

Panau and Russia enjoy good relationships. These two countries have good trading relations, particularly in arms dealing. Both countries cooperate in military-industrial sectors. During the Panauan struggle for independence against he British, the Soviet Union secretly helped arm the revolutionaries by arming the rebels in the fight against British imperialists. Unlike most western nations, Russia is neutral in term of the Panay regime. The relationship between of both remain good, however, put into question after Russia was invloved in coordinating attempts to secure Panauan oil during the Islands unstable periode in mid 2009. Depsite this, Russia still remains one of Panau's best allies.

Shortly after Panau gained independence from British rule in the 1950s, relations between London and the newly formed Panaun state were poor. Several coup attempts by the MI6, as well as the lynching of many known Brit's meant that post-independence ties were delayed. Just as relations began to stabilize, the Panauan revolutionary leader, Dahari Panay, labelled Britain as an 'Arrogant Power' and stated that Panau would never bow to it's imperial ways. However, the two nations have improved ties through natural and human resource trade, although Pandak Panay has criticised the UK for promoting regime change on the island.

Panau and the Netherlands maintain good relationships. Although there is some stigma towards the Dutch in Panau due to it's occupation of the island before British rule. However, Both countries are now cooperating in large development and restructuring state projects.

Below you can find a geographical map of the Republic of Panau: 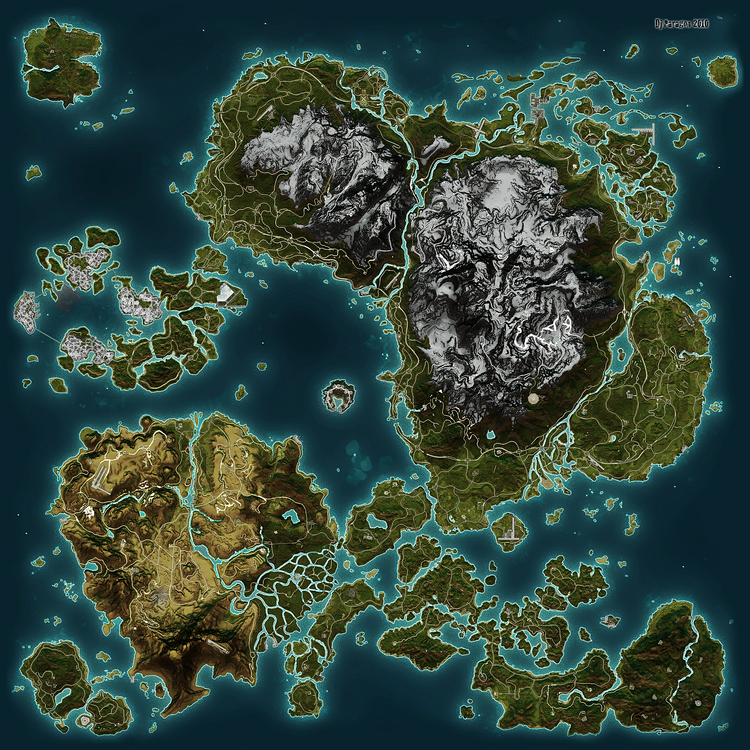 As read in the previous heading, it can be seen that Panau is one of the world's most diverse countries. In the southwest is the Gurun Lautan Lama, which is blazingly warm. In the north and northwest the Pegunungan Berawan Besar are one of the northern hemisphere's coldest peaks, with mount Berawan Besar as the highest. The rest of Panau is mostly a lush tropical jungle, which of course has a tropical climate.

The Republic of Panau's armed forces is collectively named the Panau Armed Forces, or PAF.The President acting as commander-and-chief. The entire nation is sealed by the military, meaning there are countless roadblocks and house-to-house searches. The military acts as the police force, coast-guard, and most of the country's other forces, such as ATC controllers.

The force as a whole is not that big at all, however, if the country is provoked, it can release a very deadly and lethal nuclear arsenal any place in the world. The islands of Panau are cluttered with small military outposts, communication stations, and huge military bases, many of which include a deep mountain bunker.

Muslims make up majority of the in the Republic of Panau, with 78% of the population. Next in line come the Buddhism who have 12% of the population. The rest vary between Protestants,Catholic, and Hinduism is the third largest making by merging it is up 10%. Religion has been a major role-player in the society of the Republic. Panau is one of the religious hubs of the Malay peninsula, with many places of worship. There are many Buddhist and Hindu shrines and temples around the island nation.

Panauan cuisine reflects the multicultural aspects of Panau. Various ethnic groups in Panau have their own dishes, but many dishes in Panau are derived from multiple ethnic influences. Food preparation differs from place to place, even though they are all cooking the same food. Different preparations have different taste and decoration, but generally the ingredients used are the same.

Media in Panau is completely controlled by the government.

The Internet in the Republic of Panau, is mostly controlled by the Panauan government, and is heavily censored, including the ban of several movements's websites against the Panauan government. The government has also filtered search engines such as Google and Yahoo, however one of the only ways to access these sites is through an advanced proxy, such as TOR.

All personal computers sold which are sold in the Republic, have (mandatory) been configured that the Panau News Network, or PNN, website, is the homepage.

Broadcasting in Panau, is, as well as the internet, mostly controlled by the government. Most, if not all outside news is censored, and all programs and broadcasts must be approved by high levels of government before they can take to the television. Panau Broadcasting Center is the most dominant broadcasting agency in the Republic.

The Panau News Network can interrupt any show or program to spread their news, or negatively, governmental propaganda.

Sports and games in Panau is one of the events which have been strengthen the relationship between the multiracial people. Sports and games in Panau consisting of various types such as water sports, racing, sports in field, traditional games, racquet sports and is done by people of various age levels. Until today, sports in Panau has become a major activity in the local universities where they often perform an annual sports or recreational activities between universities and colleges merely to inculcate the spirit of cooperation and the spirit to win a competition and meet each other and thus strengthen the relationship between one another.

Retrieved from "https://conworld.fandom.com/wiki/Panau?oldid=299041"
Community content is available under CC-BY-SA unless otherwise noted.