Pangam-Pangat is a planet, fourth from its star. It is similar to Earth in most of its characteristics, but it developed societies different from those of Earth. Societies tended to form around certain key cities, each with their own unique culture.

Thietia is one continent home to the species called Nymarians, which after centuries of warfare officaly controls a large swath of land from the Frigid Northern Shelf state of Andor, the green and yellow colured islands collectively known as P'jem's Jewels reaching back southwards to the base of yellow indicated plains and mountain ridge. Extending Northwards again with undisputed claim and control of the areas in brown to the west and with claim and settlements to the smaller areas in green finally ending on the great island of Vathlo. Eventually settling 90 percent of the planets' surface.

As of the current date of (Earth Year 2730) Nymarian Federation is the pre-emenient nation in Industrial capability, Military, Scientific and Medical research and most critically its Space borne industry.

Thietia is a temperate region with peaks of 26 degrees celicus to lows of -12 in populated areas, bio diversity is an understatement as Nymar is only a hand full of regions which host abundant bio-luminescent flora and fuana, from the gorgeous neon blue organisms which populate the oceans in summer creating near fictional scenes of brightly coloured blue water (they are non toxic-beign life forms analogous to plankton)

Early in its technological era Nymarians knew the fragility of their environment, which ensured constant effort and political will power to push advance technologies mainstream for the general public as not to over burden their environment. Most notably the Future Environment Act, and the Planetary Sustainablity Accord.

Nymarian government is a bicameral direct democracy. The Nymarian Federation consists of 30 states with each one allowed two Statesmen or Women for the Legate Council and 30 Axios Members of which 10 must be Academics in the Philospical Studies 10 are Masters of Engineering and 5 are Military and the remainder civil leaders.

The economy of the planet is in humble words strong every from food production, banks, the average standard of living is near utopian, infrastructure is second to non from telecommunications to essential needs of health care to water. Corruption is near non-existent because of the independence from fossil fuels and a robust off world mining industry and a booming colonist drive for off world settlement.

Pangam-Pangat is the fourth planet from its sun and the second-largest terrestrial planet in the system. The planet has a total of four continents (known in English as New Manchuria, Thietia, Porrimia, and Cadia). There are three oceans: the Interior (Central) Ocean, the Exterior Ocean, and the Southern Ocean. Land takes up only 22% of the surface of the planet. 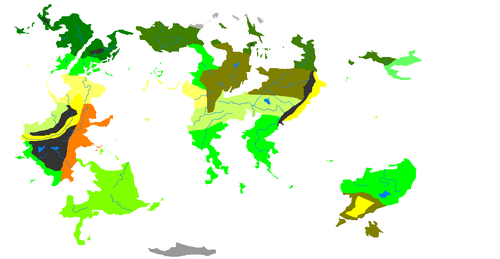 Retrieved from "https://conworld.fandom.com/wiki/Pangam-Pangat?oldid=299504"
Community content is available under CC-BY-SA unless otherwise noted.