The Republic of Atlion is a federal constitutional republic located entirely upon the island of Albion in the Atlantic Ocean. It is an island nation, completely surrounded by the ocean. The Republic was founded in the mid 18th century between a post-French union of independent colonies and a fledgling republic both occupying the island. Its capital is at Luminaire.

The derivation of the word Albion is discussed by Eilert Ekwall in an article called "Early names of Britain" in Antiquity 1930. Gallo-Romance Albiōn (cf. Middle Irish Albbu) derives from the Proto-Celtic * Alb-i̯en-, sharing the same stem as Welsh elfydd "earth, world", together with other European and Mediterranean toponyms such as Alpes and Albania has two possible etymologies, both plausible: either *albho-, a Proto-Indo-European root meaning "white" (in reference to the white southern shores of the island), or *alb-, Proto-Indo-European for "hill".

When the decisions came in 17## to name the country, the revolutionary government debated on whether or not to use Albion as the name for the country in any case. However, after two weeks' discussion, it was decided that the words Albion and "Atlantic" would be merged, which finally led to the creation of the name "Atlion."

Main article: Politics of the Republic of Atlion

Main article: Government of the Republic of Atlion

Main article: Law and justice of the Republic of Atlion

Atlion follows a roughly similar legal and justice system as that of the United States, because of the two countries' bond since the Atlionese Revolution. Criminal protections exist within the Constitution, such as protection against warrantless search, self-implication, due process and trial by jury. The highest court in Atlion is the Supreme Court, which has original jurisdiction over a very small number of cases, and is the last court of appeal. The Court is also part of Atlion's system of checks and balances, and is regarded as the final bastion to declare a law unconstitutional.

Main article: Armed Forces of Atlion and Foreign relations of the Republic of Atlion

Main article: Administrative divisions of the Republic of Atlion

The Republic of Atlion is a federal constitutional union of ten states on the island of Albion. An eleventh division, the National Capital Region, is the nation's federal district and exists outside of any state. 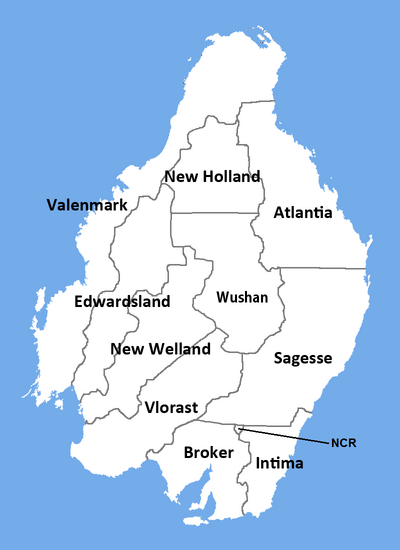 The Republic is officially a secular state, as provided by the Constitution, however, a unique element of the constitution is that states have the right to declare a certain religion their "official" faith. Similar to the English Anglicanism, citizens have the right to follow any belief they see fit and are in no way legally bound to follow their states' official religion. Many states, such as Broker, have no official religion adopted, although the majority of its residents are Christians.

-Students from every state gather in the New Holland Concert Center. They show off their instrumental and vocal skills in front of many people.

-People flock to the massive stadium in Robinson City for sporting events. Sports there vary from ping-pong, to professional soccer!

-Every year, on the 4th Wednesday of August, the nation celebrates their soldiers lost in battle. The day is called, "Remembrance Day"

Retrieved from "https://conworld.fandom.com/wiki/Republic_of_Atlion?oldid=244135"
Community content is available under CC-BY-SA unless otherwise noted.