The Royal Guard is the land component of Mariana's armed forces. The Royal Guard is has existed for over 500 years and was historically an important military in the Mediterranean region. Nowadays the Guard fills a largely smaller role, but is still well-trained in order to deal with any issue. It is headed by General Gabriel Styler, as Head of the Royal Guard.

The first military units in Mariana were seen during the War of Independence in 1427. They were mostly conscripted men from Mariana. Later on, Swiss mercenaries were hired by the republicans to fight the better trained Venetians. During the time of the Marianan Republic men there was not much need for a standing army, although men were occasionally recruited from the regions to serve in the military.

The Royal Guard itself was founded in 1482 as a guard to the Royal Family and the King. The Guard became a true military with the establishment of the Veldwachter (Field guards) in 1517. Modeled on the Swiss Guards and Landsknecht, the Veldwachter were professional soldiers who led the army into battle, ahead of the cavalry and infantry. Many of these served as mercenaries in Europe and were involved in the invasions of Ibiza in 1519 and 1533, as well as in the fight against corsair pirates.

In February 1915, Mariana declared war on German for various reasons, primarily the invasion of Belgium. Marianan troops were sent to France in March and April 1915, after conscription was introduced. 1600 soldiers were sent, with 1200 going to Artois in France and 400 to Ypres in Belgium. The first Marianan action occurred on 9 May 1915, during the Second Battle of Artois. At Artois the gains were early on and minimal, and by June there were 520 dead and 208 injured. At Ypres the situation was even more dire. At Second Ypres, the 400 Marianans took part in action at Frezenberg and Bellewaarde. At Frezenberg the 150 Marianans fought bravely but there were only 36 survivors. At Bellewaarde there were 250 soldiers. On 24 May, the Germans launched a gas attack followed by rapid attacks. The Marianans became unable to defend their positions and only nine soldiers survived, most from the infamous Company 8. For the rest of 1915 Mariana did not send more troops, as a consequence of such high casualties. In April 1916, 2500 enlisted soldiers were sent to France. Their first action was at the Battle of Albert, the opening stage of the ill-fated Battle of the Somme. On 1st July there were some 780 Marianan casualties with many dead mowed down by machine-gun fire. By the 13th there were 1500 casualties, including 815 dead. Subsequent action on the Somme would occur in September at the Battle of Flers-Courcelette, where another 600 would be injured or killed. The remaining troops were sent back to Mariana in November and December.

No further Marianan troops would be sent to Europe until the summer of 1917. 2800 men were in Europe and their first action was at the Battle of Poelcappelle in October 9. 620 men died that day but there were only 118 wounded. The Marianans spent the winter at Ypres and Saw action again in April 1918 (Battle of the Lys, during the German's Spring Offensive. A further 860 soldiers were killed (plus 450 injured) during April, after which the survivors were sent home. In total 6900 soldiers served overseas, with nearly 4000 dead. This was the highest casualty rate in any war for Mariana, not even surpassed during World War II.

When Germany invaded Mariana in May 1941, the Royal Guard was tasked with Mariana's defense. But, the Germans advanced rapidly and overwhelmed all defenses. Much of the troops in Cape Cross Parish surrendered but most of the guard went south and was evacuated on naval and other ships to Alexandria, Egypt. This bold "Escape to Egypt", right under the German's noses was seen as a moral victory and morale-booster, as some 9,800 soldiers were able to escape, including their commander, General Frederick Schiller.

In Alexandria, the Marianans were idle a few months, but were called up to participate in Operation Crusader. They marched through Egypt and Libya and joined British and allied troops in the relief of the Tobruk siege. They were active in the back-and-forth action in North Africa throughout 1941 through 1943, including the successful Second Battle of El Alamein. In late 1942, the Marianans were linked up with the British First Army (also made up of U.S. and Free French forces) to participate in the Tunisian campaign. By May 1943, when Axis forces surrendered in Tunisia, some 980 Marianan soldiers had died and 1080 were injured. For the next year, the Marianans were back at Alexandria.

As a prelude to further operations in Europe, some 3000 American soldiers and 1000 Marianans (from Alexandria) were used for the liberation of Mariana in July 1944. Barely a month after the invasion of Normandy, German defenses were lightened up and upon landfall the resistance rose up to actively fight the Germans. Following the rapid liberation, the remaining troops in Egypt were called upon to participate in Operation Dragoon, the invasion of France from the south. 5000 Marianans took part in the initial invasions at Alpha Beach, near Cavalaire-sur-Mer. Linking up with U.S. troops, they advanced to Avignon and by September were in Lyon, which they were told to secure and defend in case of German counter-attacks. Out of Mariana's participants, there were only 478 dead and 490 wounded. In early December the troops were sent back to Mariana, in time for Christmas.

Since World War II, the Royal Guard has not engaged in any active fighting. During the height of the Cold War, Mariana set up the Intelligence Office to deal with any threats. The guard has been reduced in numbers, but with better equipment and technology available is much better prepared for action. Mariana participated in Operation Desert Shield/Storm (Kuwait) and a number of UN missions in non-combat roles. 260 Marianans served during the war, and the war saw one soldier injured.

From 2003 to 2008, some 350 Marianan guardspeople went to Afghanistan alongside German troops to work on military strategy, training with Afghans and primarily communications, as part of the Euro-Atlantic Partnership Council. Brunanters were stationed in Kunduz Province, at the German Kunduz Base (Forward Operating Base Adriana) and were focused on non-combat roles. Despite this Brunanters had to engage Taliban insurgents on several occasions during the period. 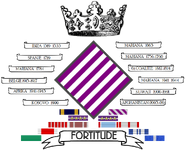 35th Medical Company "Bordas"
Add a photo to this gallery

17th Infantry Company "Pegasus"
Add a photo to this gallery 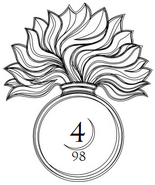 37th Medical Company "Grantley"
Add a photo to this gallery

32nd Infantry Company
Add a photo to this gallery 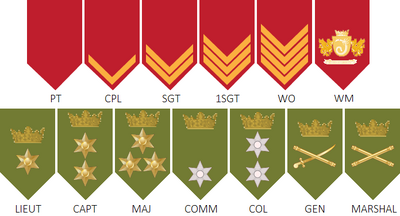 Retrieved from "https://conworld.fandom.com/wiki/Royal_Guard?oldid=302003"
Community content is available under CC-BY-SA unless otherwise noted.