Start a Wiki
The author(s) request(s) that you do not make significant changes to this project without first seeking approval.
By all means, please help fix spelling, grammar, and organization problems. Thank you.

The name Sharqistan comes from the union of two terms: şarq ("east"), to denote the nation's location and the possible origins of the early Sharqi people, and the Persian suffix -stan, meaning "place of", "country".

The Sharqi Khanate split from the Golden Horde and was founded in 1493 by Ajbek Khan. It lasted until 1847, when it was annexed to the Russian Empire.

On 29 November 1991, following the breakdown of the Soviet Union, the Sharqi SSR declared independence from the Soviet Union. As soon as the nation was granted independence from the USSR on 30 December 1991, the first leader, Aleksandr Samanaev, estabilished a socialist regime, which would last until 1999 (his death). He was succeeded by Karghan Miljetov as ad interim President. In 2001, Alikhan Shaporajev was elected and promised to continue Samanaev's wills.

In 2004, after Shaporajev was ousted from office, Eruslan Najkirov was elected President. He founded the Borsa Pavlodar (BPA) by merging the Pavlodari Trade System and Sharqi Intercity Currency Exchange; he also legalized private property (it was already legal de iure, but it was never applied de facto) and replaced the Sharqi som with the Sharqi manet (1 manet=10,000 somlar). Five years later, Nurzhan Temirov was elected; he applied policies which were vaguely similar to Samanaev's, but with heavy focus on nationalism and militarism.

In 2013, the ban on the SMF and other parties was revoked and a new President was elected. As soon as the president was elected, Temirov's party, Menen Ult, was dissolved and its recreation was banned; all members went either to the ŞHP or to Ujoşma.

The fall of the Temirovist regime has, however, started a series of national conflicts, mostly composed by political-oriented clashes.

Sharqistan is located in Eastern Turkestan. It borders Russia, China and Kazakhstan.

The country is served by the Irtysh River, while the most important lake is the Lake Zaysan.

The Altai Mountains range is located in the eastern part of the country, just before the Sharqistan-China border.

Sharqistan's capital city and largest city is Pavlodar, with 333,412 inhabitants.

Sharqistan was founded as a Socialist Marxist-Leninist single-party state, with the President being the highest public charge (and the one with the widest powers) inside the political system. Although considered an isolationist state by the foreign media, Sharqistan started opening relations with other nations in 2007, with China and Russia being the first. Since 2013, the People's Party is no longer the ruling party in the People's Assembly.

The territory is divided into twenty-five districts (tumanlar). Independent cities (Pavlodar and Oskemen) are not subject to control by any district.

With the New Country Act of 2015, the regions (vilajatlar) have been abolished.

A railway connecting the major cities was built in 1955 and is currently undergoing a refurbishment. The nation is also served by Sharqi Freeways (Şarqi Avtostradalar).

Sharqistan is largely populated by the Sharqi people (89%), followed by a significant minorty of Kazakhs (8%) and other groups form the remaining 3%, including Russians (1.4%) and Uyghurs (0.7%). The country's net migration rate is 0.03.

According to Sharqi National Law 9, an expatriate can be granted citizenship after residing for 15 years, providing that the requester has never been involved in any crime and can speak fluent Sharqi language. 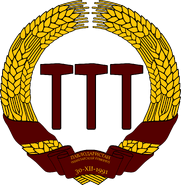 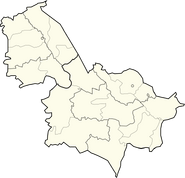 Retrieved from "https://conworld.fandom.com/wiki/Sharqistan?oldid=241193"
Community content is available under CC-BY-SA unless otherwise noted.